The Truth About Passive Income Today I want to talk about passive book sales because I know a lot of authors just want to spend their time writing; they don’t want to market, so they are attracted to the idea of making passive income from their books, but I think some authors have unreal expectations. I know I did when I first got online.

So, I want to share my thoughts with you and you can make u your mind for yourself.

These are two ways to make money with non-fiction books:

2. using books as a lead magnet to sell products, coaching, and services.

I have made over a million dollars using #2 in addition to other marketing tactics. And the reason is that when I first got online, all I wanted to do was write books, but I listened to a lot of the experts who said you can make a lot more money from teaching what’s inside the book than from book sales. That’s why I started exploring coaching in the first place: luckily, I liked it and my business took off from there.

But like most authors, I still wanted passive income so I have listened to a lot of those who teach it, and I have to say there are some misconceptions about it.

You absolutely can make passive income with books. You can run Facebook ads, Google ads, or AMS (Amazon Ads). But I have stayed away from buying ads for a couple of reasons. 1. It’s common knowledge that many people lose thousands with these ads. 2. Everyone I have spoken to behind the scenes who uses ads has said that you shouldn’t try to do it yourself because you have to watch the ads carefully so you don’t lose a lot of money as well as to maximize their effectiveness, which adds another layer of cost to it.

I do have some friends who make a few thousand dollars a month (that I know of) with Amazon Ads (AMS ads), but I had Mark Guberti on my podcast and Mark is very successful, so I value his opinion as well, and he has said it is easy to make some money with AMS ads that it’s very difficult to scale Amazon ads.

But, beyond that, the truth is that I haven’t heard of anyone making millions of dollars selling books passively whereas I know many coaches and creative visionaries who do so through their other endeavors, like Mark Victor Hansen and Jack Canfield, which has now sold over a billion copies.

Now, I don’t know how much work they actually do with the books at this point, as they are making so much money they can afford a team to put new books together, and these books are collaborative, so they don’t write them themselves anyway

But, when they started, they did a lot of marketing, including showing up on a radio show a day. And they had other income streams, and still do, events like Mega Book University ( which I spoke at) coaching, masterminds and more. And I regularly see Jack Canfield promoting his events.

And I can tell you that he sells books through these events as well as from his marketing of the books (if he does any directly, which I honestly don’t know)and the efforts of all the co-contributors to the books. So, they’ve got a massive marketing machine behind them, some passive and some active.

But, there are also others who sell a lot of books who got famous working at something other than writing, and then they gained a following and made a name for themselves, and that alone sells their books passively on a regular basis. People like Deepak Chopra Suzie Orman, and Richard Simmons, and even lesser-known niche-experts like Jeff Walker, and, of course, political figures like Secretaries of state Hilary Clinton and Colin Powell and Presidents like Barack Obama and George W. Bush.

The bottom line is that I don’t know anyone who is making the majority of their money from passive income and certainly not without building a platform and a name for themselves. That doesn’t mean you should build passive book income, you absolutely should, but don’t expect it to happen quickly or without building other streams of income as well and don’t expect to make millions from it unless you are prepared to be massively famous!

Ellen Violette is an award-winning book and business coach & Grammy-nominated songwriter, who works with creative visionaries who want to write a book because they have a tribe and following who are hungry and waiting for it, and want to open doors to bigger opportunities and make a bigger impact in the world. 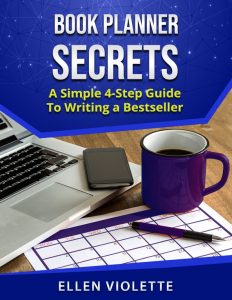